Why I Write: A Narrative Response to an Abstract Question 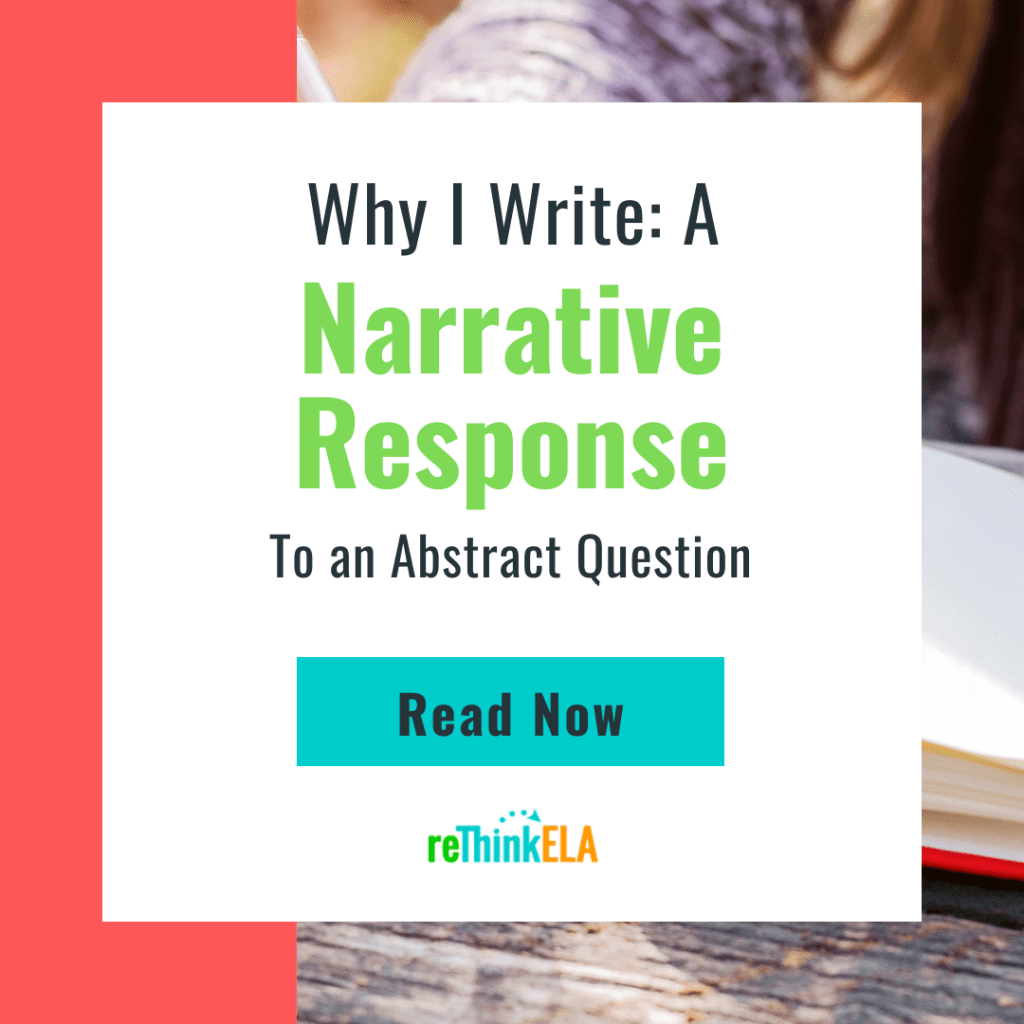 Have you had a teacher or professor ask you to write about some abstract, existential topic like “Why do you write?” Or “Why do you teach?” That’s what my Paint Write professor did to us this week. To be fair, we could write 3-5 poems on topics assigned by random friends on Facebook, or we could write about why we write. The idea of writing three or more poems made my brain seize up like a bicycle with a rusty chain and when I think about why I write, the only thing that comes to mind is the story about the time I got called to the principle’s office on the first day of school in the eighth grade. So I decided I’m just going to share that story.

As a writer and an English teacher, I publish my opinions all over the Internet and stand in front of classrooms full of teenagers and talk all day long. But this wasn’t always true. I have always liked writing and school, and maybe that’s because as a quiet, socially anxious teenager, I never caused any trouble. I mean, I was that kid who never got called to the office and who flew under every disciplinary radar in existence. Getting in trouble or speaking out would have required me to climb out of the safe little box I’d crafted for myself. My report cards were full of comments about how I was well-behaved, a “joy to have in class.” So, imagine my surprise when, on the first day of eighth grade, way back in the mid-80s, an office aide trudged through the sweltering heat of an August day in Oklahoma to the barely air conditioned portable building where I sat at a drafting table waiting. She handed the teacher a note calling ME to the office. What could I have possibly done?

I took the scrap of paper and started the long journey down the dusty sidewalk engraved in the red dirt of the Oklahoma prairie and pondered all the different ways I could have foreseen my impending death--I mean, this trip to the office in the low-slung, cream-colored cement building with the brown roof that looked like a bad haircut. As this was, again, the first day of school, I had to reach way back to the previous year and examine any conversations I’d had with my teachers in my quest to find a reason for my current journey through the broiling heat waves rising from the sidewalk.

While my feet carried me down the sidewalk, my mind took me right back to my seventh-grade English class. It was the perfect safely-hidden-in-the-box experience for an introverted teenager who preferred hiding behind the metaphorical flowers on the wall and who would have been mortified if the teacher had called on her during a discussion with her peers. It was so safe, I only have one memory from class that entire year and it involved an off-hand remark by the teacher.

I can barely remember her though. She was a bit on the tall side, but not exceptionally so. She had dark hair and a nice face. If you’d asked me who my favorite teachers were, her name would not have made the list. Her personality, her lessons--nothing really stood out to me. I can’t even remember why I stayed after class that day, waiting in line while other students talked with her about their assignments. I can’t remember what I said. I only remember that she said something like: “I really like your writing. You should sign up for yearbook staff next year.”

At my school, you had to be an eighth grader to serve on a yearbook and my brain immediately plunged into the idea of writing for publication even though I had no idea what that meant. It was such a far-fetched idea, how would a shy wallflower like me ever pull off such a thing?

This conversation must have taken place near the time we signed up for the next year’s classes because, as I continued my journey to the office, sweating as the summer sunlight reddened the back of my neck, I remembered thinking about the conversation while I filled out enrollment forms in the coolness of the air-conditioned middle school cafeteria with it’s low-slung tables and attached seats. As a people-pleaser, I wanted to join the yearbook staff like she said. And I almost did. But then I noticed a gigantic hurdle. This hurdle is my only memory of the buttery yellow enrollment form and it was the one line I needed to fill out in order to sign up for the yearbook. The words haunted me even as I made my way to the office:

Did I mention that I was a very shy young girl at the time? I had never met the advisor, though I was aware of her existence because she had taught kindergarten in one of the portable buildings at my elementary school way back when I, too, was in kindergarten. I was not in her class, so never had occasion to speak to her. I just knew--and felt guilty--that I thought it was weird for a kindergarten teacher to show up at one’s middle school as a yearbook advisor seven years later. How was that even right? I could feel my face burning at such a disrespectful thought, like she would probably know exactly what I was thinking. So, because I was shy and relatively certain that she would end my life with the arch of one eyebrow should I dare darken her door with a request for a signature without an engraved invitation, I signed up for drafting instead.

Now, here I was, plodding across the parched middle school campus, and I knew I was in terrible trouble. Nevermind I still couldn’t figure out what I could have possibly done, but I was convinced that nothing good could come from a trip to the office: On. The. First. Day. Of. School.

As my brain cells continued to scurry from one end of my head to the next, searching under stacks of mental paperwork, combing through half-empty mental filing cabinets on their search for a possible reason, I arrived at the door of the main school building and let myself into the cool hallway, which might have been refreshing had I still not been so busy mentally wringing my hands. As if that was going to add a few seconds to my life.

I forced one foot in front of the other, shuffling my way to the office, to certain death. (This was middle school, remember?)

When I arrived what seemed a million years after I’d left the drafting class, and opened the glass door to the office, I discovered my seventh grade English teacher, the yearbook advisor, the school registrar, and the principal all standing in the small office. Waiting for me. I looked at them. They looked back at me.

I figured it was time to start hunting for burial plots.

I don’t remember the exact details of the following conversation--most likely because of an overload of adrenaline-fueled, I’m-going-to-die-today hormones, and trying to figure out how to hide my shaking hands— but the gist of their reason for dragging me out of my proverbial comfort zone was this:

“We want you to sign up for yearbook staff.” I have no idea who said this.

“If you want to be on the yearbook staff, you need to let me know right now so I can change your schedule.” This from the registrar.

Did I mention they wanted me to decide immediately?!

As I pondered my past and future lives flashing before my eyes, I had an epiphany: If all of these people were so insistent I join the staff that they would haul me out of class and confront me like this, I should probably listen to them and sign on the dotted line. After all, what did I have to lose? It wasn’t like I was going to die or anything. I mean really. How dramatic!

So I signed up.

I don’t even remember going back to class. I do remember the opportunities I enjoyed writing stories, taking pictures, designing layouts, eating lunch, and making friends with the yearbook staff. These were my people! When the yearbook arrived at the end of the year and I saw my work in black and white, I was hooked.

The next year, at the mid-high level, I decided to try out newspaper staff. After all, I reasoned, I saw grown ups working for newspapers, but not for yearbooks. As newspaper staff members, my classmates and I learned how to interview people, write in the inverted pyramid style, and design layouts using an X-acto knife and rubber cement without hurting ourselves. We published an issue once per month and in that process, I discovered I had ink in my veins (of the non-tattoo variety).

Since then, I have worked for--and won awards on--high school, collegiate, and professional newspaper staffs. After giving up my writing career to stay home with my children, and starting a home-based web development company, which I later sold, I realized that my true calling had been to write. And later, I discovered it was to teach writing.

So why do I write? Because my seventh grade English teacher planted that seed, the school staff dragged me down that long, sweltering sidewalk to the office on the first day of school and poured some water on that seed, which blossomed into several career paths over the rest of my life. While that particular teacher wasn’t the first or last one to encourage me to write, she was the first one who went out of her way to push me out of my safe little box and into my journey as a writer. I want to teach and to write so I can make a difference like my seventh grade English teacher. 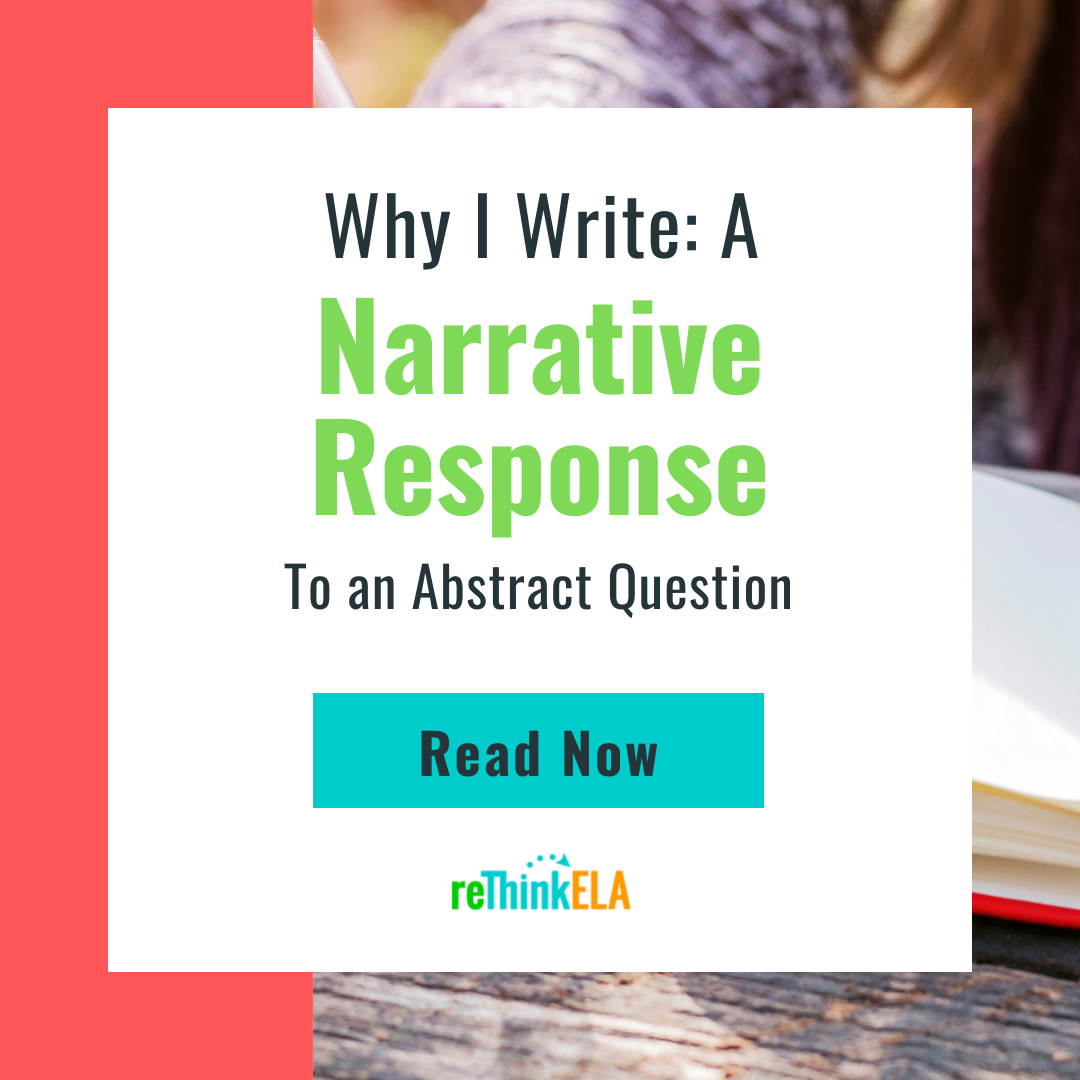