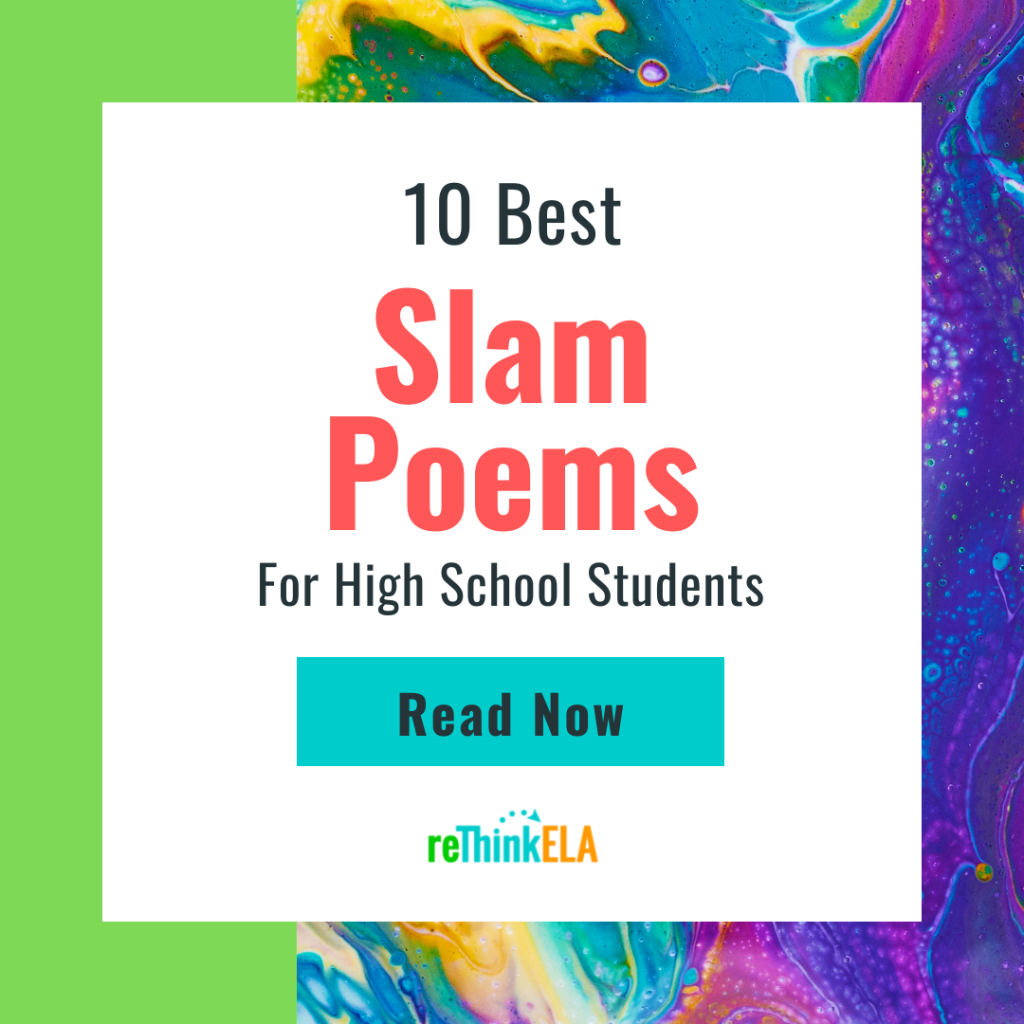 Note: Check out our slam poems for middle school, too!

Every year I want to write posts sharing my favorite poems for National Poetry Month. But unfortunately, every year, April is also national testing month and I get so caught up in juggling testing and grading and planning and taking care of my students that I just don't have the bandwidth left to write about poetry until sometime in June. And then it's too late.

But because I have stepped out of the classroom this year, and am taking a Creativity in Composition class again, I can actually thing through this. So I chose a my 10 favorite poems from my YouTube poetry playlist and am sharing them here. Since some of these poems cover tough subjects (that might make someone feel something) I am putting all of these in a post for high school students. In the next few days, I'll write one for middle school students, too.

Before you step into your classroom tomorrow, listen to Episode #010 of the RTE Podcast: "Fostering Student-Led Discussions with the TQE Method." While I have primarily recommended this method of analysis for novels and short stories, it will work on poetry, as well.

In no particular order, here are the 10 best slam poems I recommend for your high school students:

Looking for a point and counterpoint, perhaps for an argumentative unit? Watch Taylor Mali's "Like Totally Whatever, You Know?" and then watch Melissa Lozado-Oliva take him down with her "Like Totally Whatever" version written through a feminist lens. Check out the allusion to "Legally Blonde" at 2:29. Be aware that Melissa's version includes one expletive at the 1:14 mark. TW: Sexual violence referred to at 1:25.

In "Native Tongue," Micah Bournes questions why it was okay for Shakespeare to invent more than 1,700 words we still use today, creatively change the meaning and usage of words, but when young Black people do the same thing, they are considered uneducated -- but are still emulated. you can read the lyrics here.

In "Mine Eyes are Lean" playwright Ins Choi shines light on the inequalities and invisibility faced by Asian American actors in the United States.

I first watched "Shrinking Women" by Lily Myers after losing 40 pounds and running a few 5K races in my mid-40s. I'm still not sure how I feel about this, but perhaps this slam poem will be meaningful to the quiet young women sitting in your classes.

In "When Love Arrives" Sarah Kaye and Phil Kaye knew what love looked like in the seventh grade. But then love decided to throw in a plot twist over the years. Note: A minor expletive is used at the 2:51 mark (just another word for poop, in this context).

The Philadelphia team perform "Letter to My Future White Son" at the 2015 Brave New Voices finals.

Malcolm London's "High School Training Ground" critiques his experience in schools and how they are microcosms of our society. In this TED Talk slam poem, he tells the story of "oceans of adolescence" who come to school "but never learn to swim," of "masculinity mimicked by men who grew up with no fathers."

Perhaps some of the references (Blu-Ray) in this 2011 slam poem, "Touchscreen" by Marshall Davis Jones, are dated, but the message that we're too plugged into our digital worlds and not our physical worlds is still relevant today. Judging from the comments on YouTube, apparently students and other English teachers agree.

In "Disorder," Chris Loos shines a light on the experiences of boys who have been labeled and medicated since they were young children.

I first discovered Taylor Mali while judging a humorous interpretation event at a high school speech competition in Norman, Oklahoma. A student performed a compilation including a couple of his poems and I fell in love "What Teachers Make." While the SlamNation video is much funnier, in my opinion, the video in the left column is much more school appropriate.

A fellow graduate student in my Creativity in Composition class at The University of Oklahoma shared this slam poem by Dylan Garrity called "Rigged Game." Garrity does an excellent job of pointing out the ills in our education system -- so good that we spent much of our class time discussing the problems we see and the solutions we wish we could implement. I think your students will have a lot to say or write, as well.

While "Changing the World, One Word at a Time!" was first performed in 2014, the message was still relevant when I first discovered it and shared it with my students in 2017. Perhaps it's even more relevant today with the censorship we are facing in several states. Personally, I think the Brave New Voices version is more dramatic, but it includes the F word.

From graphic organizers to rubrics, we offer several resources to help you engage students in your lessons and provide actionable feedback. Just click the button below.

I need that!
Previous
Next

This site uses Akismet to reduce spam. Learn how your comment data is processed.