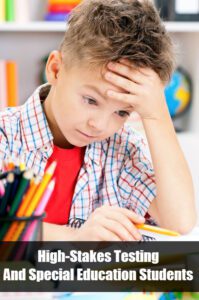 We have read stories in the news about the detrimental effects of high-stakes testing on kindergarteners, third graders, and high schoolers, and I have recently written about what we need to do to help our students pass these tests.

What I don't see are the stories about my middle schoolers, who are taking annual Oklahoma Core Curriculum tests in math, reading, and social studies, and who will be expected to pass the 8th grade reading test in order to receive a driver's license when they turn 16.

Like the elementary and high school students, middle schoolers come in all shapes, sizes, and abilities. You can especially see this during the seventh grade year, when some children have matured, and others still look like 5th graders. But the differences are much deeper than physical appearances. Some of them fit into the mold school requires of them — and some most definitely do not. Unfortunately, those students who do not fit that mold, whose scholastic abilities fall outside the range that is considered standard, are suffering under the current testing regime in this country.

A former student, Clarice*, is one such student.

She arrived at school excited for every day. She always raised her hand when I'd ask for answers or volunteers to participate in classroom discussion. If we were in an assembly, and a participant was needed for an activity, she was the first person to jump up, waving her hand in the air. She didn't seem to care, or had no idea, that “cooler” students might make fun of her. She just threw herself into school whole-heartedly.

She had a terrific attitude, and I would have loved having several students like her in my class. There was just one “problem.” When Clarice arrived in my seventh grade class, she read at about a second grade level. She was always the first one to volunteer to read out loud, but for most words, she would see the first letter and guess what she thought the word actually was. As a student with an IEP, she received extra supports in my classroom, including extra time to complete assignments, one-on-one assistance from my special education co-teacher (who has 35+ years experience in the field), and the opportunity to redo any assignment with less than a 60 percent. With the supports in place, she succeeded in my classroom.

Her Oklahoma Core Curriculum Test scores (since special education students are no longer allowed to take an alternative test) placed her in the “unsatisfactory” category.

Many of my special education students (those who are on IEPs) are like her in that they try really hard, but never quite reach the goals our education leaders have set. On top of that, some districts are using essay writing and reading benchmark tests to help teachers prepare students for the state tests. The kids are taking at least five additional tests per year, in some districts — possibly more. That's an awful lot of “failure.”

This experience is not unique to me and my students. Renee Hale, a 6th grade English Language Arts special education teacher at Jarman Middle School in Midwest City, tells a similar story:

I teach 6th grade special education and I co-teach in two ELA classes. I see testing from both sides. Although it isn't a state requirement, our district requires essay tests in order to prepare for the OCCT. This past Thursday, the students had an argumentative writing essay. Two class periods were allotted. The ESL classes started practicing the Thursday before. That's six ELA class periods and two other class periods devoted to one test. We had school as usual on Friday, then no school on Monday. We returned today and had to administer the STAR reading test. One of the students, not on an IEP, stomped her feet, fell to the ground, and yelled, “What is all this testing? Testing, testing, testing. That's all we do.” Some of the other comments were, “We just took a big test.” “Why do we take so many tests?” “How can we learn if all we do is take tests?”

I still have students who are non-readers, and who are elementary level readers. What is going to happen to them when they continually “fail” to meet what our leaders state is proficient? Are we going to deny them a diploma, even though they spent the same amount of time in school as everyone else, and, in many cases, struggled harder than “cognitively typical” students? What's going to happen to them as adults after 12 years of being told they are failures, that they are not good enough?

So what happens to the approximately six percent of the student population with significant cognitive disabilities—whether general intellectual disabilities, language impairments, reading impairments, non-verbal learning disabilities, or autistic spectrum disorders? What happens when their classrooms function under a set of guidelines that ignore their skills and specific needs?

I started teaching special education in 1980 for the simple reason that, ‘you can't put a square peg in a round hole.' I'm discouraged and disgusted that I'm being forced to go back to pre-1980. I call it being forced to engage in child abuse. Granted, special ed has had its down sides and wasn't properly used in many instances, but I'm afraid we'll lose a lot of potential with the stress we're putting on them now.

Tests cannot be read to below-grade-level readers, even if they are on only the first or second grade level in middle school. Students must be completely incapable of reading before we can read the test to them. I can tell you right now what's going to happen. Some students are going to struggle in frustration for hours to take the tests. Others are going to shut down and click through in five minutes. Neither student will score well, and their scores will be used to punish their teachers and schools who have worked hard to encourage, teach, mentor, and value them as human beings.

I have had a student who could not read a word on her own. However, if I read each word as she pointed to it, she could identify the part of speech when asked, and could tell me what the sentence said. What's going to happen when we can't read the test anymore?

So what can we do?

According to Nikki Jones, a first grade teacher in Tulsa Public Schools, teachers and administrators need to take a stand for our kids:

Teachers are going to have to wipe away their beat down self esteem and pick it up a notch. We went into this profession because we want to make a difference in the lives of children and foster a life long love of learning. We don't get to turn our heads on this. We don't get to fear the system. We don't get to be silent. Silence is consent. Teachers call on parents to stand up…To me, that's passing the buck. It's our job. Teachers tell me they can't risk their job. Well, neither can I. I live paycheck to paycheck. But, I'd rather stock the racks at a department store than participate in harming children or the dissipation of public education. At the end of the day, I think most teachers feel that way. It's time for ALL of us to step up and respect ourselves and our knowledge base even when nobody else does.

*Names and identifying details have been changed for student privacy.