What Will VAM Do To Oklahoma Educators? 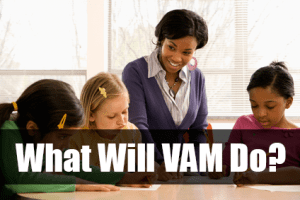 While Oklahoma educators have been fighting CCSS, political battles, and high stakes testing, another component of this mess is sneaking up on us.

It's Value-Added Measures, which will make up 50 percent of a teacher's evaluation after this coming school year. According to the Oklahoma State Department of Education, VAM is:

A measure of a teacher’s contribution to student academic growth. The measure is designed to isolate a teacher’s value added from other factors that might affect a student’s scores but are outside the teacher’s control. It is one of multiple measures that will be used to evaluate the performance of teachers in Oklahoma’s TLE system.

Our SDE describes how VAM is calculated:

In Oklahoma’s value-added model, “typical-peer scores” are estimated by looking at the achievement of students’ most similar “peers” in the state. These peers are similar in terms of scores earned on multiple assessments and other background characteristics.

It is important to note that by looking specifically at “typical-peer scores,” the value-added model is designed to isolate a teacher’s value added from other factors that might affect a student’s scores but that are outside the teacher’s control. These factors include students’ status as English-language learners, use of individual education plans, and attendance at
school.

Part of this process is Roster Verification, which gives teachers the opportunity to link themselves to those students they have taught during the year, and indicate what percentage of they year/time they were taught. 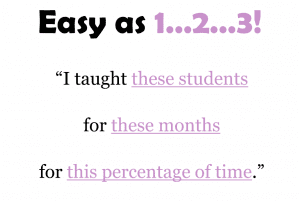 My question is: Will this process really be that easy?

What about 7th grader who is in a math class all year, but whose parents is going through a divorce? They are too busy using him as a weapon against each other to care about his academics. He's a smart student who previously made all As and Bs in math, but he is too angry to care now. The school and his teacher have tried everything they can think of to get through to him, but he's a rock. He refuses to do his work and answers “C” on all the questions in his OCCT — he's done in 10 minutes. His raw score is abysmal.

UPDATE: Curmuducation's article today on The Mystery of Excellence provides additional insight into why the Qualitative piece of the VAM equation will not work either.

What do you think? Will this system accurately judge a teacher's value? If not, what else could be done?