What Going Gradeless Taught Me About Doing the “Actual Work” 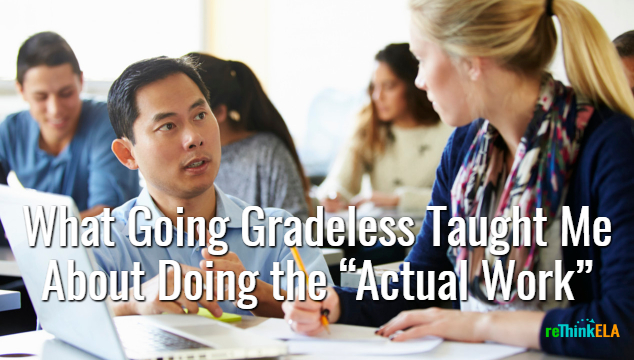 When I entered the teaching profession in 1998, I envisioned myself building relationships with students, discussing the intricacies of stories, and inspiring students to explore literature. I imagined my students developing into expressive writers who articulated their deepest thoughts with eloquence. In short, they would become lifelong readers and writers.

My first year in the classroom felt like this. I got to know every student. They showed an interest in books. And though their writing needed some structural and mechanical improvement, they were writing. It was a lot of work, but it was an amazing year.

However, as the years passed I noticed that my students were losing interest in reading. The discussions were not as in-depth; the writing became more mechanical. It seemed as though I had to threaten students with consequences, such as detentions, phone calls home, and poor grades in order to motivate them.

I began to wonder what was going on. Were the kids changing or was it me?

In the movie, The Breakfast Club, Richard Vernon, the teacher in charge of detention, complains to Carl, the janitor, about the kids. Carl reveals something that, though missed by Vernon, was quite prolific:

Carl, don't be a goof!  I'm trying
to make a serious point here…I've
been teaching, for twenty-two years,
and each year…these kids get more
and more arrogant.

CARL
Aw bull shit, man.  Come on Vern,
the kids haven't changed, you have!
You took a teaching position, 'cause
you thought it'd be fun, right?
Thought you could have summer
vacations off…and then you found
out it was actually work…and that
really bummed you out.

CARL
Come on… listen, Vern, if you were
sixteen, what would you think of
you, huh?

VERNON
Hey…Carl, you think I give one
rat's ass what these kids think of
me?

These lines resonated with me. They shook me up. Rewatching this scene felt almost as though Carl was talking directly to me. The kids did not change. I changed. I lost touch. I wasn’t someone that students wanted to listen to and I did care what they thought.

Unlike Vern, I realized I lost my focus. I was more interested in keeping a class period busy, justifying the point value of each assignment, how these points would add up to ensure that grades were earned. And, to make my class more rigorous, I scoured student work to find ways to ensure no student earned 100%. I was no longer a teacher. I was a gatekeeper. It was apparent to me because the profession was not as invigorating. I felt detached from my students, and school became a power struggle rather than a learning environment.

When I realized this, I decided that I either needed to leave the teaching profession or make some major changes. I shared my concerns with my department and they helped me to explore options that would reinvigorate me and transform my classroom.

I came to the conclusion that it was my grading practice that was driving a wedge between the teacher I was and the teacher I wanted to be. I had turned on the kids. The kids didn’t turn on me.

Grades are not an effective tool to communicate learning. Let’s say a student gets an 85% B on an essay. What does the grade suggest? Did the student stop writing and turn in a perfectly written essay when he was 85% into it? Did the student fail to capitalize proper nouns and leave out citations? Was the essay late three days and I deducted 5% for each day it was late? Was it because I was tired of grading essays and simply threw the same score I put on the student’s previous essay? It can be any of these. The problem is, this grade does not tell the student what was done well and what he could do to improve.

Not only do they fail to communicate learning, grades are a carrot and stick that neither motivate nor promote learning. They actually diminish it.

I discovered “From Degrading to De-grading,” by Alfie Kohn. In it he argues the negative effects of grades:

It seemed to me as though my focus on grades became the source of my problems. All nine of these were found in my class. The kids didn’t “turn on me.” I was no longer emphasizing relationships. I wasn't inspiring. Letter grades and points became a shortcut—a way to avoid the hard work of getting to know my students on a personal level, working with them when they struggle, finding creative ways to encourage and instill wonder. I was avoiding the “actual work” to which Carl was referring.

I learned that comments, comments and grades, and grades impacted the way students saw themselves. Butler suggested those who received comments only were more engaged in the task and viewed the work as either a success or failure. This meant that the work had problems that could be corrected and the student had the power to make these revisions. However, when students receive a grade they were more ego driven and saw success and failure as a reflection of themselves. Thus, when I put a letter or a number on student work I was passing judgment on them.

Ultimately, I wanted my students to see learning as a process of ongoing trial and error rather than a judgment of who they are. If my students do not fail they do not learn. How often have I heard students say, “I suck at math,” or “I just can't write,” or even “I'm a C student”? If my students are going to learn and be challenged, then judgment needs to be eliminated. I had to take action.

I was easily convinced that I had to eliminate grades. However, this meant that I couldn’t use them to make my students work. So could I engage students without points and letters? Once again, Carl hit the hammer on the head. This is the “actual work” of a teacher.

It became more apparent to me that students need to find value in what they learn. There has to be substance in school. In his book The Schools Our Children Deserve, Alfie Kohn challenges teachers to consider the value of the curriculum. At one point, he questions the purpose of a child knowing how to find the square root of a given number. What is the square root of 93? Kohn's answer is, “Who cares?” He suggests that if the child cannot use the information in his daily life then there is no value in the curriculum. However, if it is important for children to know how to solve the square root of a given number then there needs to be a reason. This could be said about anything teachers expect kids to study in school from The U.S. Constitution to Beowulf. Why do students need to know these things?

I latched on to the ideas found in Daniel Pink's book Drive. He suggests three things that motivate someone to learn:

I wanted to tap into my students’ “Drive” and inspire them to achieve greatness. In orders to do this, I had to start with the student’s interests. I had to ask them questions and get to know my students. I needed to provide them with choice and allow them to ask questions they find important and encourage them to seek out the answers.

Because there are factors beyond our control, not all students will be engaged 100% of the time. Kids struggle with all sorts of challenges such as exhaustion, poverty, abuse, divorce, and all sorts of trauma. And because there are certain things that are essential for kids to understand in order to be responsible members of society, it is the teacher's call to build a relationship, challenge that student, and let him know we care enough about him that we will not accept anything less than his best, because my students are worth it.

One of my favorite movie teachers of all time is Mr. Hand from Fast Times at Ridgemont High. Mr. Hand is able to reach Jeff Spicoli despite his attempts to avoid, disengage, and frustrate his teacher.

At the end of the film, Spicoli is getting ready to go out and celebrate the end of the school year. However, Mr. Hand shows up to his home, sits down with Jeff, and begins discussing the American Revolution. Mr. Hand does not accept any excuses from Jeff. When he claims that he left his book in the locker at school, Mr. Hand pulls out a copy and settles for nothing less than for Spicoli to take the time to read and explain his analysis of the text.

Ultimately, Spicoli demonstrates understanding and expresses a sense of pride in his accomplishment.

Mr, Hand holds Spicoli accountable to demonstrate an understanding of the Revolutionary War–and he does this with Spicoli. The greatest lesson Mr. Hand teaches is, and Spicoli understands this, no one is beyond hope. Every student, no matter how difficult, is worth the effort.

Learning is something that is done alongside others, not imposed upon. If the learning is essential then students need to be pushed until they get it. What makes teaching difficult is that it requires the teacher to care for the student and see value in the student. Because it is the child that is what is truly important, and this is the lesson that must be learned.

Assigning grades was the easy way out of doing the “actual work” of teaching. They made it easy for me to avoid building relationships and meeting the needs of the individual student. When I eliminated grades it tested my creativity and patience. I was forced to rethink what went on in my class. Students had to take ownership of the class. I had to incorporate individualized learning and lots of voice and choice. I had to replace worksheets, tests, and quizzes with better forms of assessment. I had to make sure that students were engaged and wanted to learn. I had to do the work with them.

I still have students who continue to challenge my patience and push me to my limits. However, I do not look at them as a problem, but rather as an opportunity to become a better teacher. They are a reminder to tap into my inner Mr. Hand, sit down beside them and do the learning with them because they are worth the effort.

Aaron Blackwelder is a high school English teacher at Woodland High School in Woodland, WA, and co-founder of Teachers Going Gradeless. He is married and the father of two boys with Autism who have shaped him as an educator. He is passionate about creating learning environments for all students. In his free time, he writes his blog, “Thinking 101” where he shares his ideas about education.