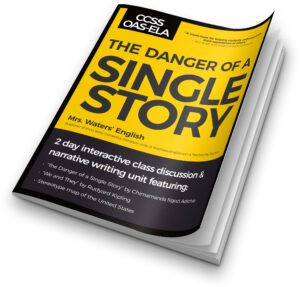 Over the past several days, I've watched on Twitter and Facebook as groups of people have heralded the National Football League players as they've taken a knee to protest social and racial injustice while opposing groups have accused the players of disrespecting the national anthem, the American flag, and veterans. President Trump suggested that players who kneel during the anthem should be fired.

As I've watched the comments in the national news and in my personal news feeds unfold, I've realized that in our divided society, where people vilify one another over straw man arguments, we must learn, and teach our children, to understand that there is more to everyone than just the single story we choose to believe.

Schools need to take this on. Particularly as companies won't (or say they can't) @facebook @Google https://t.co/yI3hCzcjkk

This is where Nigerian author Chimamanda Ngozi Adichie's TED Talk, “The Danger of a Single Story” can help us all see the humanity in one another.

Adichie starts out by telling us that she is a storyteller. She talks about how reducing people to one story takes away the complex richness of who we are. Once we've reduced one another to a single story, it becomes easier to reduce the humanity of “other” people. People who are not “us.”

I realized that as a high school English teacher, it is my responsibility to make sure my students are aware that we tend to reduce other people to single stories, to recognize when the have been reduced to single stories, and to find ways to see the complexity in people who are not like them.

So I wrote a two-day lesson that begins with Adichie's video. My students watched Adichie, and we talked about what learned from her stories. Then we read Rudyard Kipling's “We and They” poem, which further pressed the point. Finally, I asked my students to make lists of ways in which people have reduced them to a single story.

Students who I had “fought” to write a paragraph during 5-minute daily quickwrites for a year wrote full essays about the single story they'd been pegged with. One student even shared the story on social media without my prompting. I realized that this lesson meant something to my students, and I thought it would mean something to your students, too.

So I am sharing it with you.