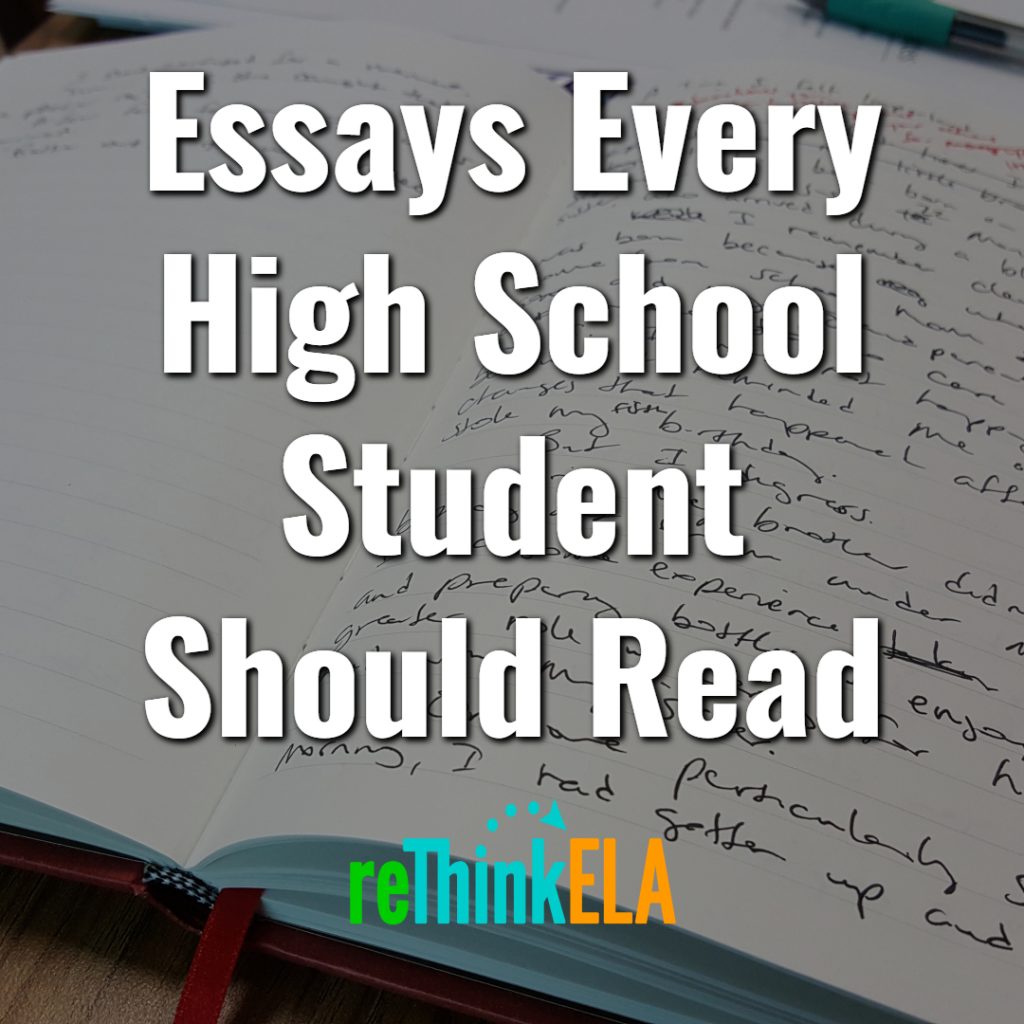 One of the most important goals of any English class should be to help students learn how to express themselves to an audience — how to tell their own stories, how to provide much-needed information, and how to convince others to see things from a different perspective.

Below are some essays students can read, not only to help them see how such writing is done in the real world, but also to learn more about the world around them.

Need a #mentortext for student essays? Check out these exemplars for personal narrative, argumentative, and expository essay writing. Click To Tweet

Note: This is a living list. I will continue adding to it as I find important essays and articles, and as my readers make suggestions.

A 17-year-old Oklahoma author details incidents of discrimination he has faced within his own community. Brief, yet impactful, the author's authenticity strikes readers at their core and naturally leads the audience to consider other perspectives.

Facebook hack ‘worse than when my house burned down’ says teacher by Michelle Boyd Waters, M.Ed.

When a hacker destroyed my Facebook account and I couldn't find a way to reach out to Facebook, I decided to use my story, voice, and platform to shed light on a situation faced by people around the world. This can serve as a mentor text for students writing personal narratives on shared experiences in the context of current events.

Letter from a Vietnamese to an Iraqi Refugee by Andrew Lam

Vietnamese lecturer, journalist, and author Andrew Lam offers advice in this letter to a young Iraqi refugee he sees in a photograph on the Internet.

Allowing Teenage Boys to Love Their Friends by Jan Hoffman

Chris Cecil: Plagiarism Gets You Fired by Leonard Pitts Jr

The Miami Herald columnist and 2004 Pulitzer Prize for Commentary winner castigates a Georgia newspaper editor for plagiarizing his work. This column would go great with this followup article from The Boston Globe: Ga. Editor is Fired for Lifting Columns.

The author of Lost in the Meritocracy postulates that getting rid of the high school senior year might be good for students.

A high school junior complains about the impossible-to-open packaging faced by consumers of everything “from action figures to zip drives.”

Drowning in Dishes, but Finding a Home by Danial Adkison

In this 2014 essay, a teenager learns important lessons from his boss at Pizza Hut.

How to Tame a Wild Tongue by Gloria Anzaldua

An American scholar of Chicana cultural theory discusses how she maintained her identity by refusing to submit to linguistic terrorism.

The five-time Oklahoma Sportswriter of the Year features the University of Oklahoma's running back.

In Praise of the F Word by Mary Sherry

An adult literacy program teacher argues that allowing students to fail will actually help them.

The Joy of Reading and Writing: Superman and Me by Sherman Alexie

A Native American novelist recounts his experience loving reading and finally writing in spite of a culture that expected him to fail in the “non-Indian world” in order to be accepted.

A heartbreaking look back at the hours before and the circumstances surrounding Lane Frost's untimely death, followed by reflections on his rise to fame — before and after death.

Learning to Read by Malcolm X

The 1960s Civil Rights leader writes about how educating himself in prison opened his mind and lead him to become one of the leading spokesmen for black separatism.

Learning to Read and Write by Frederick Douglass

A former slave born in 1818 discusses how he learned to read in spite of laws against teaching slaves and how reading opened his eyes to his “wretched condition, without remedy.”

Losing Everything, Except What Really Matters by Dan Barry

After a 2011 tornado destroys a house, but spares the family, a reporter writes about what's important.

The Marked Woman by David Grann

How an Osage Indian family in Oklahoma became the prime target of one of the most sinister crimes in American history.

Meet Mikey, 8: U.S. Has Him on Watch List by Lizette Alvarez

Read about what happens if you happen to share a name of a “suspicious person” on the U.S. No-Fly List.

After the tsunami that resulted in nuclear disaster in 2011, a reporter writes about the “quiet bravery in the face of tragedy” of the Japanese people.

No Ordinary Joe by Rick Reilly

Why in creation did American Football Conference's 1981 best young running back Joe Delaney jump into that pit full of water that day, even though he couldn't swim?

Politics and the English Language By George Orwell

Animal Farm and 1984 author, Orwell correlates the degradation of the English language into multi-syllabic drivel and the corruption of the American political process.

Serving in Florida by Barbara Ehrenreich

The Nickel and Dimed: On (Not) Getting By in America author tells about her experiences attempting to survive on income of low-paying jobs.

Starvation Under the Orange Trees by John Steinbeck

John Steinbeck, who later authored the fictionalized account of Okies in California, The Grapes of Wrath, first wrote this essay documenting the starvation of migrant workers in California during the Great Depression.

To Fall in Love With Anyone, Do This by Mandy Len Catron

Is falling in love really a random event, or can two people “love smarter?”

We'll Go Forward from this Moment by Leonard Pitts

The 2004 Pulitzer Prize for Commentary winner pens a column chronicling the toughness of the American family's spirit in the face of the September 11, 2001 World Trade Center attacks. He wrote the column one day after the attacks.

Jones, a student at Southern Illinois University in the 1980s, wrote this piece for Newsweek. In her essay, Jones adds her story and perspective to the debate over Black English.