BANG by Barry Lyga Has No Easy Answers 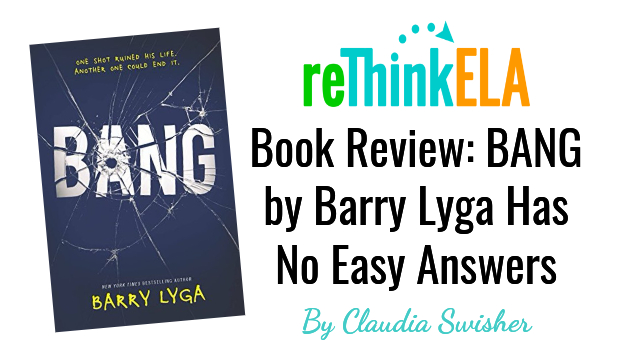 Note: This article is mostly copied from the review I wrote immediately after reading BANG, several weeks ago…this, frankly, has the strength of my visceral response.

When I sit in my chair, in ugly-tears, way past my bedtime, I know I've experienced a book that shook me to the core. Bang by Barry Lyga, did just that. I saw characters learn and grow, take control of their lives and their epiphanies. I saw a wounded young man master his own story.

Sebastian, we know from the beginning, took his father's gun off a table when he was four years old. He walked over to his 4-month-old sister…and the unspeakable happened. How does a family survive? How does a child survive? We watch Sebastian deal with his memories, or lack thereof, deal with his broken parents and broken family, deal with the outsiders who think they know what happened that horrible day. His mother deals by stoically moving forward, without ever saying Lola's name. His father deals…by deserting his family. Sebastian is left to navigate this grief on his own.

Now, ten years later, Sebastian has created a kind of life for himself. He knows the other kids laugh at him and talk about him. But he has a friend who gives him some distance from the other students. But this year,Evan goes away for the summer.  Sebastian meets a new neighbor, Aneesa (by accident — a funny scene), and her Muslim parents, a family who doesn't know his story…he finds a freedom he hasn't had with others in town. He hopes this will be a new start…

But Sebastian's voices haunt him: “Is it time? Is it time?” We worry about his emotional health, about his strength. He sees Aneesa and her parents deal with another kind of unwelcome attention from others, judgments and whispers.

The two create a YouTube channel featuring Sebastian's fantastic pizza-creation talents. They learn, push each other, and generally have fun…something that's missing in his life. That, inadvertently, gives both young people an entirely new type of unwelcome attention that they must deal with. Scrutiny, watching eyes, sidelong glances, smirks. Nothing new to either of them, but now a new reason.

The catalyst is when Sebastian's English teacher assigns a paper to the class about a significant event in students' lives and what they learned. Sebastian feels like she's assigned it with him in mind, and he knows what his teacher expects him to write about. He must decide how to handle the assignment. And his life, and his voices, and his parents, and his friendship with Aneesa…

Lyga takes dynamite issues from our lives: gun violence, prejudice against ‘others', depression, and creates a character who faces it all with a courage beyond his years…a character we watch take one step and then another toward his destiny.

Students will love this book for its honesty and humor and relationships.

I've dried my tears…but the book still haunts me. Sebastian haunts me.

Sebastian is not the first Lyga character to haunt me…he has been a favorite author since a student introduced me to I Hunt Killers. Jasper Dent, the son of a serial killer fights a different battle for his own truth. I was able to meet the author (huge points from students for that picture!) and score an advance reader copy (ARC) of the second book in the series months before publication.

Need a hard-hitting book on relevant topics for teens? Students will love Bang by Barry Lyga for its honesty and humor and relationships. #litchat Click To Tweet
Previous
Next

I've retired after 39 years of teaching. I've taught in 3 states, in 7 schools, for 10 principals, grades K-12 in public education. I am a teacher.