Help your students find their voices with our Explode the Moment Narrative Writing Project. Just click here!
You are here: Home / Pedagogy / The Ultimate List Of Resources For Learning About The Life And Legacy Of Harriet Tubman 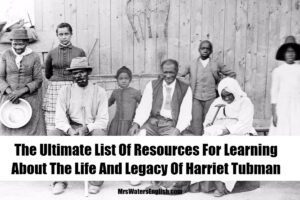 With Harriet Tubman about to take up residence on our $20 bills, this could not be a better time to learn more about the life and legacy of the Civil War Era abolitionist, freedom fighter, and former slave.

Here are some resources to help you on that journey:

What You Never Knew About Harriet Tubman by the Smithsonian Channel

America the Story of Us: Harriet Tubman by The History Channel

Learn more about how you shaped the conversation about currency redesign: https://t.co/Y5V5t5Ho31 pic.twitter.com/U1Cs9sff2G

Secretary Lew looks at a rendering of Harriet Tubman during a visit Thursday to the Bureau of Engraving and Printing pic.twitter.com/xhinAxhygG

Every student has a story waiting to be unlocked. Our "Explode the Moment" Personal Narrative Writing Project contains the mentor texts and writing tool instructions your students need to find their stories in the everyday moments of their lives. Learn more here...

I am a secondary English Language Arts teacher working on my National Board Certification, an Oklahoma Writing Project Teacher Consultant, and a graduate student at the University of Oklahoma earning a Master's degree in Instructional Leadership and Academic Curriculum with a concentration in English Education.

Are you ready to reThink your ELA teaching practices? Join my partners, 13,000+ subscribers and I for news, strategies, professional development opportunities, and resources.