Should We Redefine “Rigor” Or Find A New Word? 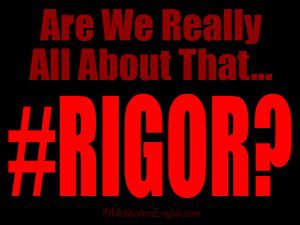 After tonight's #oklaed chat, a few educators and I hung around the Twittersphere and discussed the meaning of rigor. Yeah, we're geeks like that.

The whole conversation started with a series of tweets, namely the comment by Kenneth Ward, Bridge Creek Middle School Principal:

This comment piqued my curiosity. What exactly is rigor? And is this really the right word to use for what we're asking our children to do? Personally, when I hear the word rigor, I automatically think rigor mortis. (And frankly, I think some students experience this in some classes…) Rigor sounds hard, it sounds discouraging, and it sounds like something I don't want to have any part of. I like the definition that Mr. Ward provided though:

I also liked his qualification:

Then we had some other people join the conversation. (This is what I love about Twitter!) John R. Walkup, a former educator, and now a researcher studying cognitive rigor, added his own well-researched definition (and a huge resource on cognitive rigor) to another chat, which I followed:

So I posed the question:

Naturally, not everyone was on board with creating/redefining a word, though I can see Mr. Walkup's point:

@jwalkup @watersenglish @kennethdward amen to the enough problems. Not even enough state $$$ to pay for that million dollar word ‘rigor.'

I agree that education has more than its fair share of problems. However, I also know that if we take a look at the stack of problems and think we can't make a difference because there are more important or bigger problems than the one we're looking at, then nothing will ever change. As a writer and an English teacher, I believe language is very important. If I don't use the right words to explain to you what I'm thinking, you will not understand. This is not only important in education, but in the business world, in friendships, even in marriages. I am a huge proponent of choosing the right words, speaking carefully, and most importantly, thinking before speaking. For this reason, I'd like to use this tiny platform of mine to call for a change.

What's a better word for rigor?

@watersenglish @jwalkup @kennethdward don't worry it will probably be replaced with “vigor”or something catchy in the name of Ed reform.

Jason Stephenson, a 10th grade English teacher at Deer Creek High School in Edmond stepped in with a tidbit of information:

@watersenglish Butting in. I think it was @KyleneBeers who said it is vigor, not rigor that we want in our classrooms. Hope this helps.

I don't know anything about the reputation of Kylene Beers, but I do like the word vigor. It has such a positive connotation! The denotation isn't bad either.

According to Dictionary.com, vigor means:

The synonyms are bursting with positive energy:

When I think of vigor in my classroom, I envision students:

This certainly beats the definition of rigor:

Naturally, any word with a great meaning can be twisted around to mean its total opposite. (Just think about how people my age used “bad” in the early 90s and kids today use the word “sick” to describe something that is good, or how current education reformers twisted “reform” to mean destroy…) However, it's nice to start off with a word that has a positive meaning, then build upon it, instead of starting with a word that evokes images of dead bodies. (Shudders…)

So, what do you think? [tweet_box]Should we start talking about how we're injecting cognitive vigor into our lessons?[/tweet_box] Or do you have a better word?