What Does The Common Core Repeal Mean? 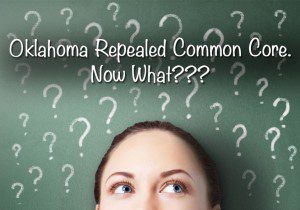 That's a good question, and one I'm still trying to figure out. We may not even know until our legislature makes a few more decisions.

In the meantime, here are Oklahoma educator- and administrator-penned articles that shed some light on the issue:

The bill that was signed provides for the legislature itself to have the power to make changes to the standards as they see fit without any recourse for the SDE or those who wrote them. This means that any number of wacky ideas can make it into the those standards once  all of those other folks work hard to develop them. Not a good scenario, is it?

Adopting and implementing Common Core and the related high-stakes testing and accountability mechanisms are tremendous wastes of time and money that we cannot afford. Yes, let’s stop Common Core, but as a key step to stop the entire flawed education reform movement built on ever-new standards and tests.

Arne Doesn't Have To Do This by Rob Miller states:

There will be much debate and discussion about the ramifications of this decision for months to come. The most significant implication that has already surfaced is the potential for a loss of our state’s waiver from No Child Left Behind (NCLB).

In short, we must continue working to ensure that education policy in our state moves away from failed high-stakes testing and top-down accountability measures. We must replace this Draconian educational regime with policy makers who collaborate with educators to serve the best interests of our children.

The first step in making these changes is voting on June 24. You can watch what our candidates (most of them) for Superintendent of Public Education had to say at the Annual Cooperative Council for Oklahoma School Administration Summer Conferenceon June 5 in Norman below: