Are We Doomed To Repeat History? 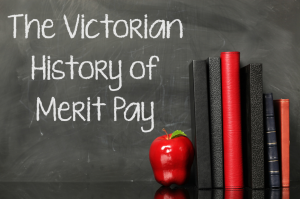 It seems we already are…

Every day I read through several education-related blogs to see what's happening, to keep up with developments in our current education reform saga. Today, I landed on Diane Ravitch's blog, where she wrote about business author Daniel Pink's video that explains why merit pay fails every time.

I admit I have not watched the video. Apparently, it uses graphic language, and I have had my children in the house all day. And I can't find my headphones. (Note to self: Ask children about the headphones…)

Anyway, I read the article and then the comments. One comment in particular captured my attention and precipitated this post.

A user going by the handle “KrazyTA” states:

One of the longest merit pay systems involved extra pay for better test scores in England … and it lasted from 1862 to the mid-1890s:

(a passage from a scholarly article follows)

As historical accounts show, English teachers and administrators became obsessed with the system’s financial rewards and punishments. It was dubbed the “cult of the [cash] register.” Schools curricula were narrowed to include just the easily measured basics. Drawing, science, singing, and even school gardening simply disappeared. Teaching became increasingly mechanical, as teachers found that drill and rote repetition produced the “best” results. One schools inspector wrote an account of children reading flawlessly for him while holding their books upside down.

According to this 1999 article in Education Week, The Illusion of Paying Teachers For Student Performance, merit pay for teachers isn't an idea unique to the last couple of decades. Our politicians seem to have fallen in love with the idea of quick fixes, while avoiding root causes of issues and solutions that would take time and money to implement. Somewhere along the way, we resurrected pay for performance schemes first tried (and proven flawed!) in England in 1710.

Yes, these schemes really do go back that far.

The merit pay system became part of English law by 1862, as part of the Revised Education Code.

According to the Edweek article:

“In addition to reducing wages while increasing class size, the Revised Code in effect limited the very quality of the education such teachers were trying to convey to their students. After 1862, teachers were to be paid not based on the number of students they taught, but according to those students accomplishments on standardized tests: this inevitably led to cramming and to an often exclusive focus on the remunerative basic subjects, which excluded science, history, geography, and religious instruction, as well as to the neglect of students too young to be subjected to these tests. This impairment of the education available to poor children, and to their potential teachers, was not an undesired by-product of the Revised Code, which was informed by the feeling on the part of many members of the middle class that such students, and their educators, were both receiving more education than their “place” required. “

I guess one could say at least the reformers were honest back then. Today, our politicians are trying to sell us on the idea that merit pay will “incentive” teachers, increase student test scores by 4 to 10 percentage points,   and “wrests control from unions” to place it into the hands of parents, which then gives students greater opportunities.

The problems foisted upon the especially vulnerable poverty-stricken students by this system even attracted the attention of the great Victorian social critic Charles Dickens, who had a few things to say about the merit pay system. In his 1864 (and last) novel, Our Mutual Friend, Dickens wrote about teachers and pupils subject to the 1862 changes in the English system.

University of California, Riverside, lecturer Kate Carnell Watt wrote in her article on education in Victorian England, Educators and Education in Our Mutual Friend, that:

[Dickens] is making specific reference to social developments contemporaneous with the writing of Our Mutual Friend, developments which included ongoing efforts of government to reduce the wages paid to teachers and apprentices, to undermine the relationship between teacher and pupil-teacher, and generally to diminish the quality of education in state-funded schools for the poor.

Naturally, our politicians can't admit to trying to diminish the quality of education for our students. So they state the opposite, that the reforms will help students. However, this is far from the truth, as evidenced by the impact of the merit pay system described in Dicken's work and in other scholarly articles.

Brendan A. Rapple of Boston College wrote in an peer-reviewed scholarly journal in 1994, Payment by Results: An Example of Assessment in Elementary Education from Nineteenth Century Britain, that:

Kay Shuttleworth, a great opponent of the Revised Code and payment by results, had written in 1861, before the new provisions had been set in motion, that  [the plans of Robert Lowe, Vice-President of the Education Department] could be briefly described as an attempt to reduce the cost of the education of the poor, by conducting it by a machinery–half trained and at less charge;–to entrust it to a lower class of ill-paid teachers, and generally to young monitors as assistants;–to neglect the force of a higher moral and religious agency in the civilisation of the people–and to define national education as a drill in mechanical skill in reading, writing and arithmetic. The State would pay less, and be content with a worse article. (Kay Shuttleworth, 1862, p. 429)

Fortunately for our English counterparts of 150 years ago, these “reforms” were short-lived, having been mitigated by amendments to the code by the 1890s.

One can only hope — and I am frequently assured by my colleagues who have way more years of educational service than I do — that these efforts to deform education will be short-lived, that our children's welfare will be returned to where it belongs — in the hands of the trained professionals who are internally motivated to care for their students and the administrators and local school boards who support them.

Our goals should be to work collaboratively within our schools, districts and states to provide humane and “true” education with the goals of encouraging students to explore their natural abilities, talents and roles in our nation.