Why Is Journalism Important To Me Academically? 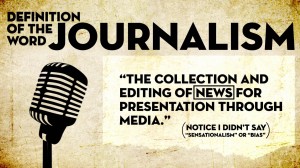 NOTE: I have been blessed with an opportunity to teach a Mixed Media Journalism class at my middle school. We are currently waiting for a video camera to arrive, so until that happens, I have been teaching students about the importance of journalism to them academically, and its importance to the country in which we live.

Students have no idea what the role or purpose of the press in their daily lives. For students who don't really care what's going on in the world outside of their town, neighborhood, or circle of friends, convincing them that they should pay attention may be tough.

Students who think they can't write, who don't want to write any more than they already do are a trough crowd as well. As a matter of fact, I have lost students from journalism staffs as soon as they found out they would be expected to write, and not just take pictures, or nap.

So it's best to “hit them where they live,” which is in the gradebook.

For students who care about their grades, who want to graduate and go to college, or technology school, or start a career, showing them that being involved in a journalism program can increase their grades and scores will help pique their interest.

I like to start out my lessonwith a bell ringer, asking them to answer the following question in their journals:

Why is journalism important to my academic career?

You may get some goofy answers (It isn't!) or some serious ones.

After they finish the bell ringer, discuss running suicides in basketball and the duck walk my daughter's coach taught her to use when preparing for her season playing catcher in softball. Each of these practice techniques not only strangthens the muscles needed for that particular game, but they also build stamina and perseverence. Then watch the “death crawl” clip from Facing the Giants below:

After the video, discuss the lessons learned by Brock and his teammates.

Next, divide the class into four groups. Hand out the following set of articles and divide it up so that each group has  three articles to read, annotate and summarize.

Once they have completed the reading, ask each group to share their findings with the class. The notes they took can be used as a grade.

Next, ask students to watch the following video, in which journalism students talk about why being on staff is important to them: